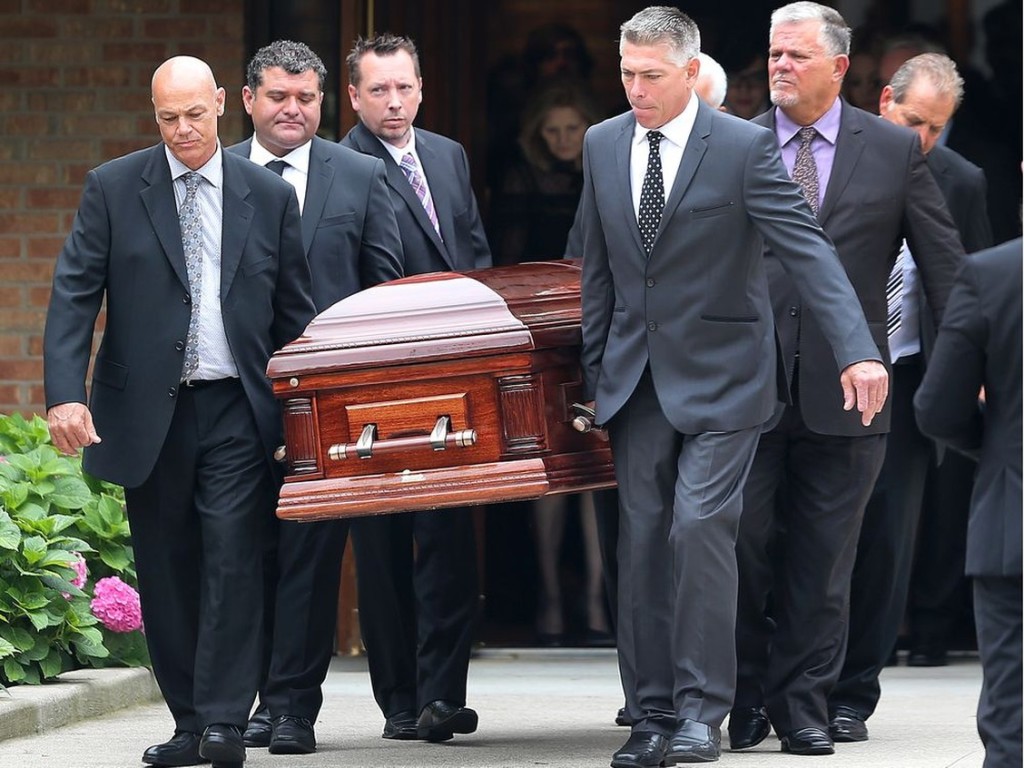 Pallbearers carry the casket of Mark Boscariol after funeral services at Our Lady Of Mount Carmel Church in Windsor on Aug. 1, 2018. PHOTO BY DAN JANISSE /Windsor Star

Mark Boscariol was a dreamer with a “mighty heart” and palpable energy. He was inexhaustible. He was like the Tasmanian Devil.

The popular restaurateur and city champion, who died suddenly at age 51 last Thursday, built more than businesses. He built community. And he helped shape Windsor.

“That is his legacy to our community,” city councillor Bill Marra told several hundred people who celebrated Boscariol’s life and mourned his death at his funeral at Our Lady of Mt. Carmel Church on Wednesday.

Boscariol was the ultimate citizen. He was passionate and engaged. And he walked the walk. Time after time, he stepped up.

When council rejected Little Things Matter, a program offering small grants to help fix the exteriors of downtown houses, Coun. Rino Bortolin, who represents the core, turned to Boscariol. And Boscariol stepped up. He printed information about the program on his restaurant menus and solicited donations from customers.

Long before the university and college moved downtown, before extensive new incentives for developers last year, when downtown was a wreck, Boscariol was there, operating a long list of restaurants, cafés and bars. He opened Snackbar-B-Q (he loved a play on words) on a bleak stretch of Chatham Street. When three other restaurants opened later on the same block, instead of competing with them, he rallied them to promote the block as a lunch destination.

“The point is to bring people to Chatham Street,” he said.

“He championed this city like no one else,” Pat Papadeas, one of Boscariol’s colleagues on the local political podcast Rose City Politics, told his funeral.

“When called upon to help, Mark’s help was immediate, unwavering, and it sometimes took you places you never foresaw or expected — or even imagined,” said Papadeas.

He said what he thought, and sometimes it was harsh. He called council’s decision to veto Wyandotte Town Centre’s World Marketplace “astounding in its hypocrisy and doublespeak.”

But he didn’t just pull it out of a hat, as Papadeas said. He read. He listened. He watched what successful cities do. He modelled his proposal to buy the Pelissier Street parking garage, save the storefronts, cover it with public art and stage events on the top deck after The Z in Detroit, the funkiest, most talked-about parking garage around. He and one of his employees went to the Congress of New Urbanism in Windsor and Detroit in 2016 “so we can try to contribute more to our city.”

“His million and one ideas would come at you like a tornado,” said Papadeas.

He’d carry on four conversations at the same time — while texting. He wrote in the Rose City Politics Facebook chat group at all hours of the day and night.

His ideas were big and small.

In 2004, then-prime minister Paul Martin invited prominent local Liberal Richard Pollock to meet with him to discuss the border. Pollock brought Boscariol, recounted Papadeas. And Boscariol, ever exuberant, brought a big, Bristol board map of Windsor. He carried it on the plane all the way to the prime minister’s office on Parliament Hill. He taped it on a wall. The prime minister wanted to talk about a new bridge. Boscariol marched up to the map, pointed at Brighton Beach and said this is where it should go. Construction started last month.

But he also knew that small things, like cleaning the streets, mattered. He even pumped coins into parking meters downtown for strangers so they wouldn’t get tickets and could enjoy the core a little longer.

And he understood that a business owner can do the right thing and still make money.

He made Windsor better.

His untimely death, leaving his wife, Daena, and 13-year-old son Andreas, shocked the city because it’s difficult to comprehend how such a force of nature could suddenly be gone.

While he leaves a “gaping void in our community,” as Papadeas said, Boscariol was a gift that keeps on giving. The film festival continues, and now shows films throughout the year. The busker festival begins next week. Donations to Little Things Matter are being collected in his name. And a new hashtag — #BeLikeMark — is inspiring people anew to care about their community.

We have an opportunity, Marra said, to embolden, to motivate, to emulate.

Read the original article on the Windsor Star HERE