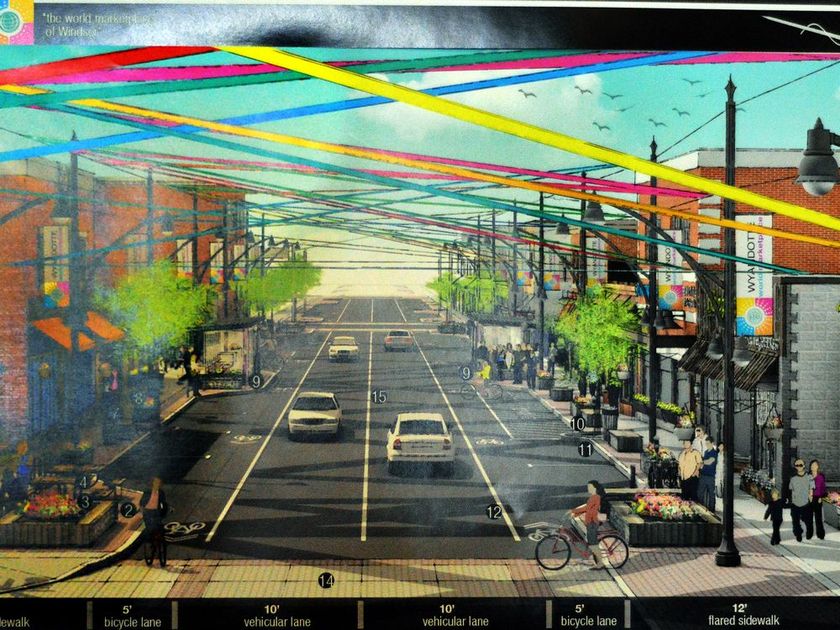 Council doesn’t know enough about it, they said. So why did council approve it in principle last year and commit $1 million to it?

It was a teachable moment, unfortunately.

The Wyandotte Town Centre BIA had a vision to transform its rich ethnic diversity into a destination. It was to be called World Marketplace. They hired an architect and met with the city. They worked on it for five years, spent $50,000 and committed another $400,000. They were excited.

In a reversal from out of the blue, city council extinguished the plan Monday.

The lesson? You can have initiative and passion. You can work hard and put skin in the game. You can do everything right.

But sometimes, it appears, the fix is in.

It was morose entertainment watching six councillors contort themselves to follow what sure looked like another whipped vote.

The theme doesn’t fit the street, Coun. Paul Borrelli said of the most richly diverse street in the city.

What do the police think? asked Coun. John Elliott, the most irrelevant question in a disingenuous two-hour debate.

Council doesn’t know enough about it, they said. So why did council approve it in principle last year and commit $1 million to it? The project was presented to council last year. Architecttura, the architect, met with city planning, engineering and fire officials multiple times. It altered the design and engineering to deal with the city’s concerns. There was a recommendation to assign a city project manager. This wasn’t a whim.

If councillors had more questions, why didn’t they notify BIA chairman Tamara Kowalska. She didn’t know they were  debating it again until a reporter called her, she told Rose City Politics.

This is taxpayers’ money, councillors said. The BIA has already spent $50,000. It committed another $400,000. It will pay for maintenance. It will cost $560,000 to replace the banners in 10 to 20 years. The BIA said it will pay for that, but its budget is only $93,000 a year. That’s a legitimate question. But the city and BIA were to sign an agreement to ensure the project is feasible. And the more than 100 businesses contributing to it are owned by taxpayers — whose livelihoods are riding on this street.

The city has already approved $5.25 million for “districting.” That’s what’s telling: Does the World Marketplace fit with council’s plan for “districting?” city staff asked. There was “some ambiguity,” their report stated.

Fit with it? It is districting — capitalizing on and promoting a neighbourhood’s unique characteristics to create a destination.

The BIA was doing districting before the city. It launched a contest in 2013 for a streetscaping design that would feature its diversity. This one won.

This is the way it should be done. The city can’t do it alone, Mayor Drew Dilkens said after council approved the first $250,000 for districting last year. Residents and businesses need to step up. Wyandotte Town Centre did.

I think the mayor, who said then that he wanted a “cool” experience, just didn’t like the unusual plan, which included a canopy of colourful banners woven over the street. People might ask, the city paid $1 million for that? he told the media. They said that about his plan for $3 million in Christmas lights — triple the money, all paid by taxpayers, for one month a year. But people loved it.

There’s a lot more to the plan, too, including a town square, small parks, community gardens, public art, converting alleys into walkways.

The mayor, who lives on the other side of the city, has a different vision. He wants a Middle Eastern district. But the people who live and work on the street say there’s more to Wyandotte than Middle Eastern. They want the World Marketplace. Shouldn’t they have a say?

If the mayor and six councillors didn’t like the plan, why did they approve it last year? The BIA hoped to start construction this spring.

Instead, the mayor is focusing on converting Walkerville into the distillery district. But Walkerville is already thriving, already a destination. Why not start with a neighbourhood with just as much potential, that has struggled but where people are beginning to show interest? Start with the neighbourhood that pioneered districting.

This is about more than banners or Wyandotte now. It’s about the message this decision sends.